FROM PARADE TO FESTIVAL

The history of the Vevey Winegrowers Festival cannot be separated from the history of the Brotherhood of Winegrowers. More than just a show, it is above all a celebration born of a centuries-old tradition. In the 17th century the Brotherhood of Winegrowers, then known as the Agricultural Association or Abbaye of St. Urban, organised a yearly pageant, as did other associations. It was called a parade, procession or challenge, and wended its way through the town. With their flag and statue of the patron saint at the head, and figures on top of wooden perches representing scenes of the vineyard workers daily life on proud display, the procession left the forecourt of St. Martin’s church at the top of its little hill to work its way down through the narrow streets of Vevey to the lake front. This parade was followed by the general assembly, where the vineyard workers’ labour was commented on and criticised before the Association’s traditional banquet. First some musicians and female singers, then a small boy on top of a wine barrel playing the role of Bacchus (1730), and then another boy dressed up as Ceres, goddess of wheat and the harvest (1747) were additional elements of the parades. At a time when the Protestant Reformation put in place by the Bernese bailiffs was extremely strict and tolerated few expressions of community rejoicing or revelry, the Brotherhood of Winegrowers’ pageant attracted increasing numbers of spectators.

Around 1770, the association of citizen landholders, the Brotherhood of Winegrowers, fixed its objective of encouraging improvement of winegrowing techniques and of rewarding good performance of the vineyard workers entrusted with developing their property, rather than criticising possible short-failings. From then on, when finances and economic and political circumstances allowed, the best workers were rewarded and crowned.

It was the coronation of the best vineyard workers that changed the former parade into the Winegrowers Festival. In 1797, when pastoral fêtes and everything connected with the countryside was very much in fashion in high society, the first stands were built on Vevey Market Square, so the numerous lookers-on could attend the coronation. As some Vevey residents observed, it was also the first time that they had to dig into their pockets to take part in the festivities of the Winegrowers Abbey, or Association.

The show was the result of a desire to give a certain importance to the ceremony that rewarded the best vineyard workers. It had a structured form and new elements were added to the parade; the pageant-performance was divided into four seasons, and a new goddess, Pales, joined Bacchus and Ceres.

FROM AN AMATEUR SHOW TO A UNIFIED WORK/h2>

The troubled years following the Vaudois Revolution made it impossible to even think of another Winegrowers Festival. So, it was not until 22 years later, in 1819, that younger generations would finally discover what the Winegrowers Festival really was. There had never been such a long lapse of time between two celebrations. That year, the Old Swiss Guard, symbolic of the new Vaudois patriotic awareness and the “Ranz des Vaches”, an ancestral hymn that in this context was a consecration of the close economic and social ties between the winegrowers on the shores of Lake Geneva and the farmers of the Veveyse valley in the hills above Vevey Fribourg canton, were added to the themes already representative of the Festival. With the development of means of transport, i.e. steamboats from 1833 and the railway at the time of the 1865 Festival, ever increasing numbers of spectators came to Vevey.

Both the size and the artistic quality of the Winegrowers Festival continued to grow. From the patchwork of music and poetry of the first festivals of the 19th century, when it was enough to commission an arrangement of pertinent lyrics to popular airs of the time, followed Festivals where recognised artists created original, unified works. In 1851, François Grast composed the first complete score that gave a certain unity to the lyrics, which were still a miscellaneous mix of texts written by various amateur poets. He also wrote the score for the 1865 Festival. In 1889, it was Hugo de Senger who composed the music. The Festival was already trying to combine popular and elitist culture, taking inspiration from the Festspiele, from opera and from Alpine fêtes.

In 1905, a complete work was finally achieved, thanks to the close collaboration of the Morax brothers, René and Jean, respectively librettist and painter, with the composer Gustave Doret. They created a veritable hymn to Nature and the land, whose success would affect generations of singers.

After such a resounding success, the fear of disappointing the public and of making innovative changes during a difficult period led the Brotherhood to ask Gustave Doret to take on the 1927 Festival, with a libretto written by Pierre Girard. Celebration of another festival was put off by the Second World War. In 1955 the world had changed and the Brotherhood of Winegrowers feared that, in a society enthusiastically discovering new distractions, their traditional Festival would no longer come up to the public’s expectations. However, Carlo Hemmerling and Géo-H. Blanc took the Festival beyond its regional borders. An impressive palette of international artists joined the enthusiastic contribution of the local participants, and a slight air of Broadway blew over Vevey’s Market Square.

In 1977, Jean Balissat composed a score that admirably reflected the spirit of Henri Debluë’s libretto. Since 1955, this Vaudois author had dreamed of bringing the Festival back to its homeland and to Christian traditions, such as the Christic symbols of the vine and the wine, which had been only timidly represented amongst a pantheon of ancient and pagan gods.

The last Festival took place in 1999. It was created and directed by François Rochaix with the winegrowers and vineyard workers truly at the heart of the theatrical presentation. The Coronation was entirely dedicated to them, and then Arlevin, their facetious fictional crowned representative, took their place during the fourteen performances.

The success of each new Winegrowers Festival and the organisers’ ambition of constantly improving the celebration meant increasing financial investment, so it became very difficult to organise more than five festivals per century. The long waiting period between Festivals could have been the end of the celebration but this has not happened. Vevey is no longer the tranquil rural town of the first winegrowers’ parades. In this small industrial and commercial city, often unaware of the reality of the winegrowers’ and farmers’ lives, the once-a-generation Winegrowers Festival is a festival of remembering and of identity. It brings together ancestral traditions and contemporary preoccupations, taking the spectators back to their past, whilst celebrating the present lives of working men and women. The Winegrowers Festival is a great song of love and hope, a hymn to the land, to the homeland, to Man and his roots – a celebration of the cycle of Life.

THE WINEGROWERS FESTIVALS OF THE 19TH AND 20TH CENTURIES IN FIGURES 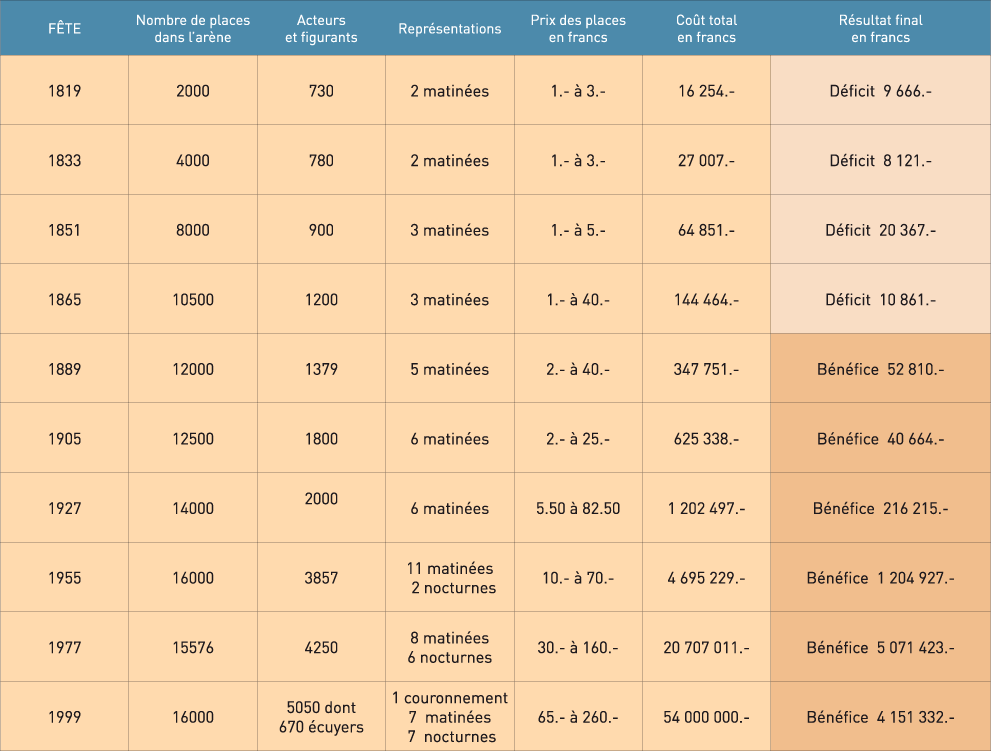 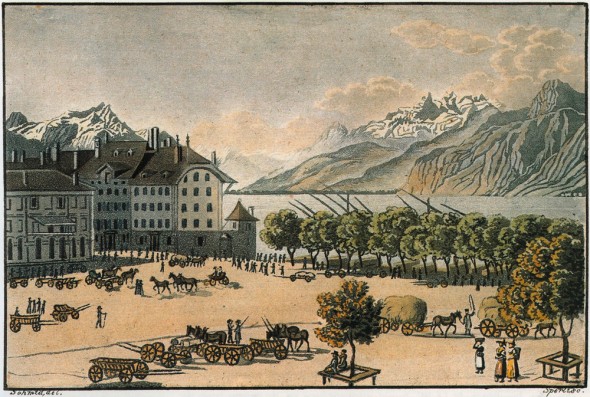 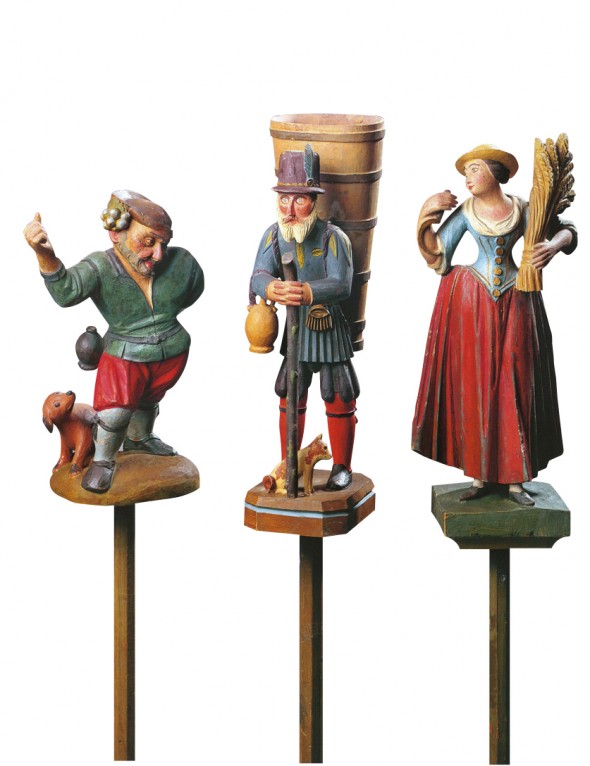 Group of grotesques: a drunken winegrower, a hod-carrier and a gleaner 18th century 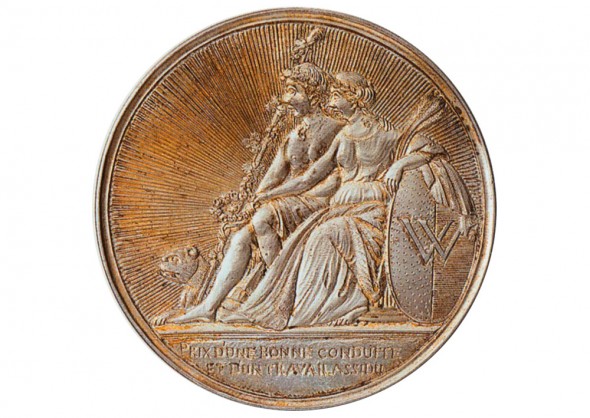 Back of medal given to crowned winegrower Descloux, Winegrowers Festival 1797 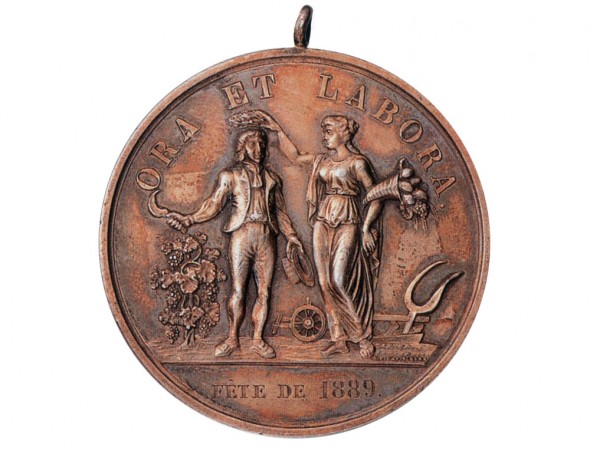 Back of medal given to crowned winegrower Blanchoud, Winegrowers Festival 1819 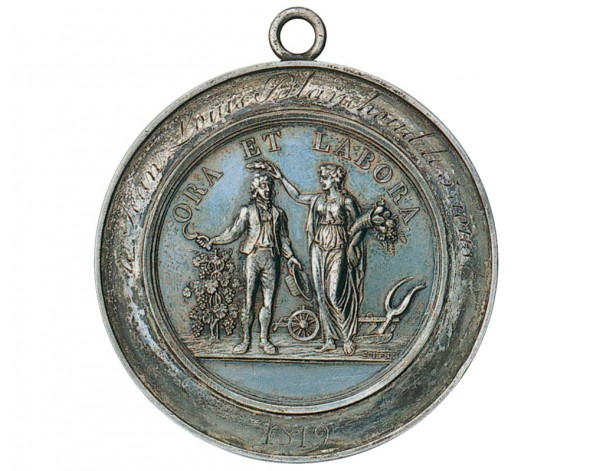 Back of medal given to crowned winegrower Pasche, Winegrower Festival 1889 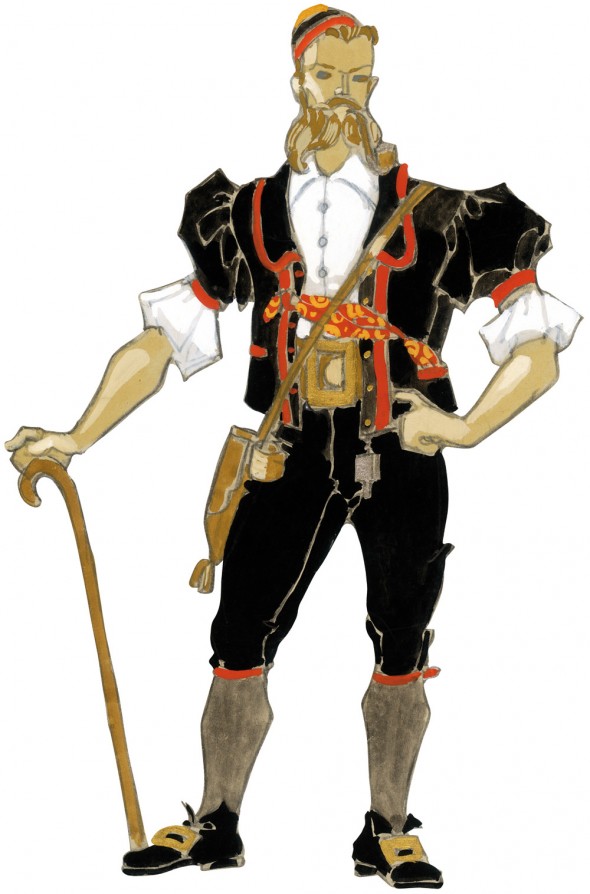 Bacchantes, fauns and Silenus on his donkey, Brotherhood parade of 1791 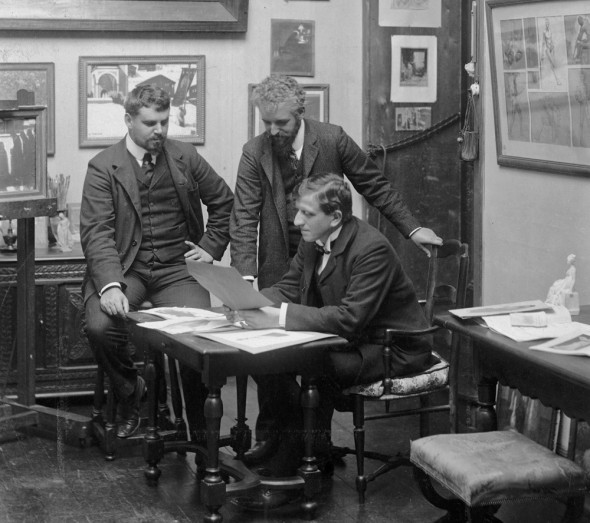 René and Jean Morex with Gustave Doret around 1905 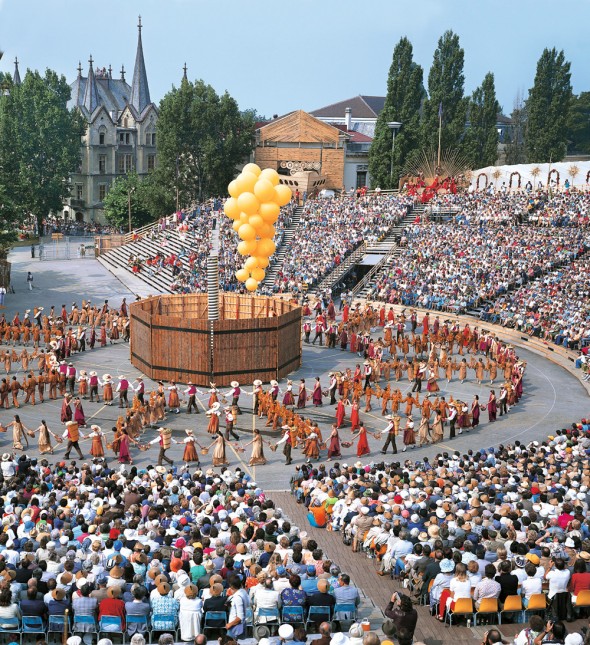 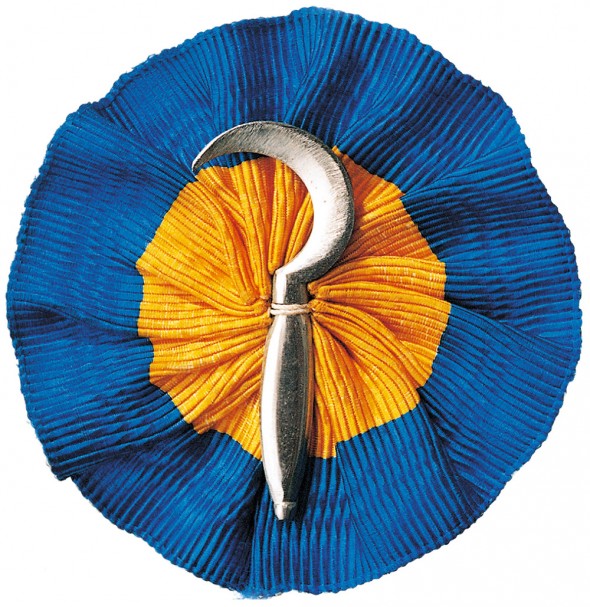 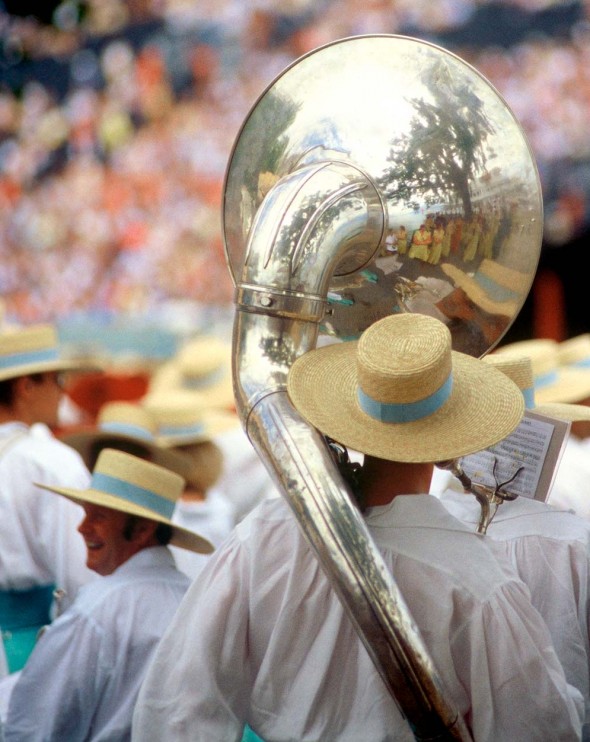