8 – 9 AUGUST: FESTIVAL FOR A NEW AUDIENCE

In 1833 steamboats first appeared on Lake Geneva and Vevey had never before had so many visitors. People were everywhere, making ample use of this new means of transport that had totally revolutionised travel between Geneva and Villeneuve since the mid-1820s. Many visitors and spectators came by boat although others still travelled to Vevey on foot:

“Fourteen years later, in 1833, as I hadn’t been able to get on board one of the steamers travelling between Geneva and Vevey early enough, I found it already so crowded with passengers that I had to resort to the public coach called the Bern Courier. It was real progress for the times. It left Geneva at midday and arrived in Lausanne at six o’clock in the evening. There was no question of travelling further either by lake or by coach. Any kind of vehicle had already been reserved. … I have never regretted the impossibility of finding a seat anywhere. It provided me with one of those fantastic journeys through the shadows that Dante would not have disparaged, and the most amusing night I have ever had. I left Lausanne around midnight and did the entire journey on foot to Vevey in the midst of the noisiest, most colourful, most agitated, largest and most joyful group of people one could ever imagine. The night was dark and one could hardly make out a star in the sky. Strong gusts of wind blew from time to time, and among general laughter blew out the lights, Vaudois or Chinese lanterns, torches or other lighting of all kinds, whose flickering light threw its rays on Téniers-like paintings, each more grotesque than the next. … I still ask myself how, amid this enormous crush of people hurrying between the floats and horses whose drivers had just made sacrifices to Bacchus and which pressed forward haphazardly in the dark night, not only did no accidents occur, nor any misplaced shouting, no unsuitable words, nor even the slightest little thing that might possibly be considered a dispute. Astonishment is two-fold when one remembers how narrow, windy, and dangerous the road between Lausanne and Vevey is, especially as one approaches Saint-Saphorin. The railroad has countered all these perils, but at the same time it has put a stop to these joyous walks, such true gaiety, this pleasant simplicity that leads you to believe you are part of a family among thousands of walkers.” Vernes-Prescott, L’Abbaye des Vignerons, son histoire et ses fêtes, jusqu’à et y compris la Fête de 1865.

8 – 9 August: Festival for a new audience

The 1833 Festival focused on the winegrowers and vineyard workers coronation. The Abbot addressed them in a formal speech, placed the crowns on their heads, decorated them with a medal and then gave them the pruning hook of honour and a monetary reward. Together the High Priest and the Councillors sang an air of acknowledgement for the excellence of their work. The crowned and rewarded winegrowers were acclaimed by the entire audience. To close this part of the ceremony, one of the crowned winegrowers had to sing a song of thanks solo, as had already been done in 1819 and as would continue throughout the 19th century.

Abbot-President: Vincent Doret
Dancing master: David Constantin
Music: Samuel Glady, son of David (first composition of original music, lyrics and music taken from contemporary repertoire)
Costumes and sets: Théophile Steinlin
Performance in front of the stands followed by the traditional parade through the town with dances performed at the “stations”.

Ramp with 3 triumphal arches at the top
2 stands
4,000 seats

A conflict in Basel almost put the Festival in jeopardy
Councillor Walther suggested two verses: one about an agitated Switzerland and one about the joy of the Canton of Vaud
Priestesses of Pales and Ceres were played by men in women’s costumes
Winter: Noah with his family of 8 children 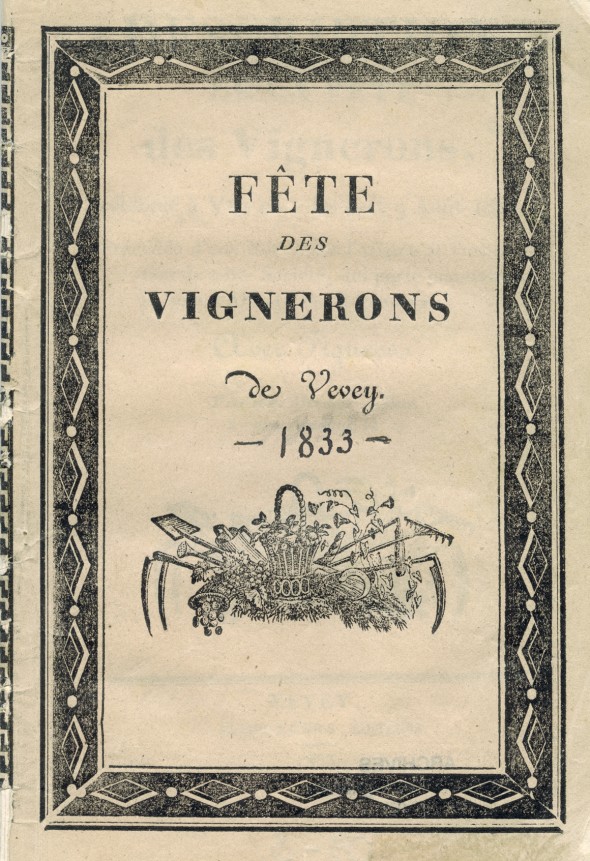 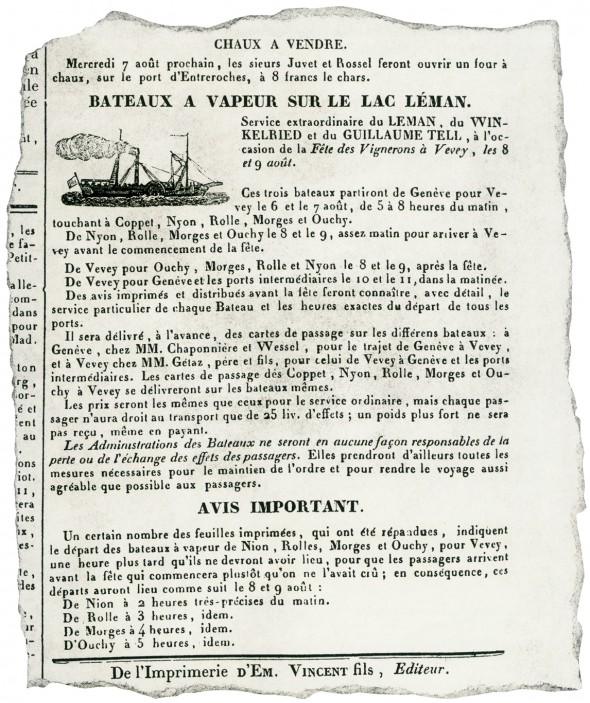 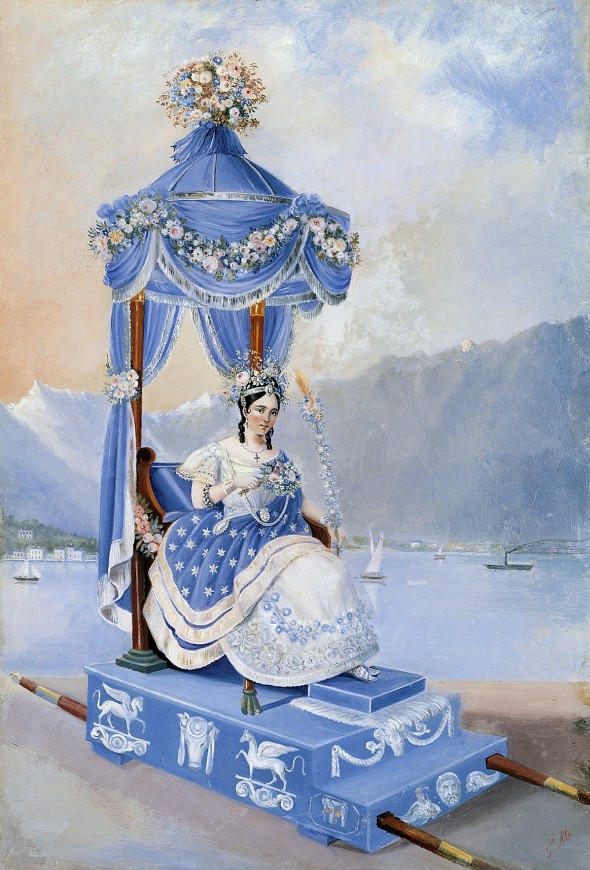 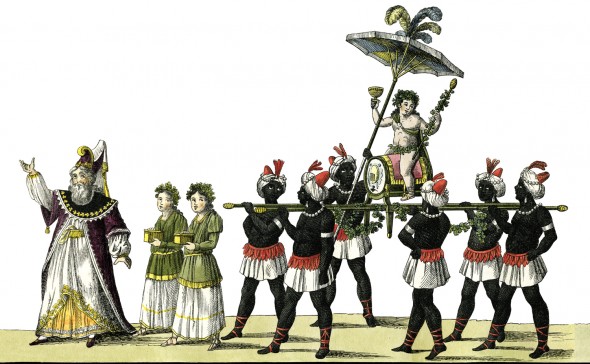 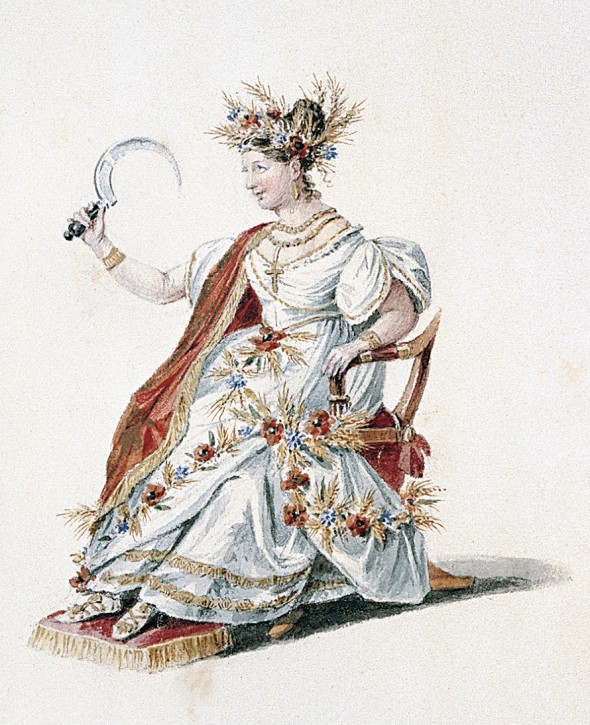