“The idea of a celebration came to me. If it is successful, it will be something impressive and… expected. A big celebration, like in ancient times. Or in the spirit of the Middle Ages. Rendering the Festival sacred, giving it a sort of grandeur and dignity, and introducing the Christic symbols of the vine and wine.” H. Debluë, Fête des Vignerons 1977, UBS.

THE CHRISTIC SYMBOLISM OF WINE

The fourth Festival of the 20th century is differentiated by a return to roots. There were no star dancers or professional soloists among the 4,000 performers. The librettist Henri Debluë went back to the order of the seasons, as in the 19th century, beginning the Festival with Spring and closing with Renewal, or eternal Spring.

The vineyard’s cycle expresses the return of the seasons, while that of wine breaks it. The juice of the grapes falls into its burial place in the cellars and comes out transfigured into wine – the new wine which symbolises Easter.

“For the festival of a people with a great Biblical tradition and whose vineyards were planted by monks, it seemed strange to me that this symbolism would not emerge.” H. Debluë, in the illustrated supplement of L’Est Vaudois, 30 July 1977

At the beginning of each of the seasons, the authors chose to celebrate one of the four basic elements: Earth, Fire, Water and Air. During the Middle Ages these elements were represented by four constellations of the Zodiac: Taurus, Leo, Aquila and Aquarius. These figures, which became symbols of the seasons themselves, are also the symbols of the four gospel-writers, the four shoots of the Biblical vine.

Henri Debluë introduced these symbols in his libretto and wanted a king, the King of the Festival played by Jean-Samuel Leresche, to allude to their meaning to introduce each season.

The authors added a winter god to Pales, Ceres and Bacchus. Janus is the personification of the new year:

“… winter is a season of waiting; but it also includes the first promises: the December solstice is the open door to the new year.”H. Debluë, General design Press Office

Janus is also the masked god. The authors wished to reconnect with the vibrant traditions of masks used in German-speaking Switzerland and which are mostly also linked to the new year.

“This year the stands face the mountains of Savoy and come down to the lake like a hillside of vines.”

“I thought we could return to the former distribution: spring, summer, autumn and winter. Two cycles, that of the vines glorified by the Bacchanal, and that of the new wine, symbolising Easter.” (H. Debluë, Winegrowers Festival, 1977, UBS)

Stage setting inspired by a large solar clock with the signs of the Zodiac and the foursomes of 4 seasons, 4 elements, 4 cardinal points, plus the King of the Festival.

Summer: constellation Leo, symbol of ripening and the Evangelist Mark, children-stalks of wheat, fishing boats, parade of farm machines, chemical hazards as well as diseases that attack the vines

Winter and renewal: constellation Aquarius, symbol of death and rebirth, and the Evangelist Matthew, children-snow-crystals, Janus, return of Noah with the winegrowers of the world. 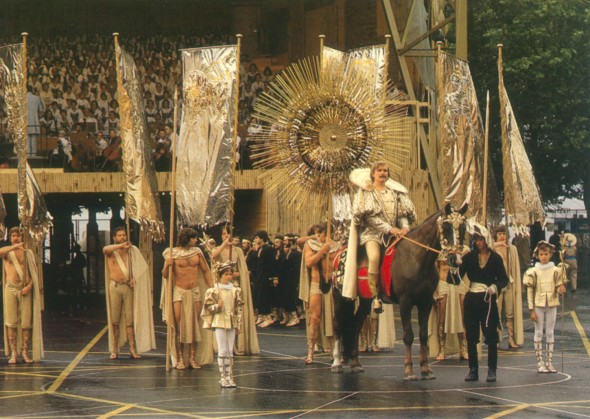 The King of the Winegrowers Festival 1977 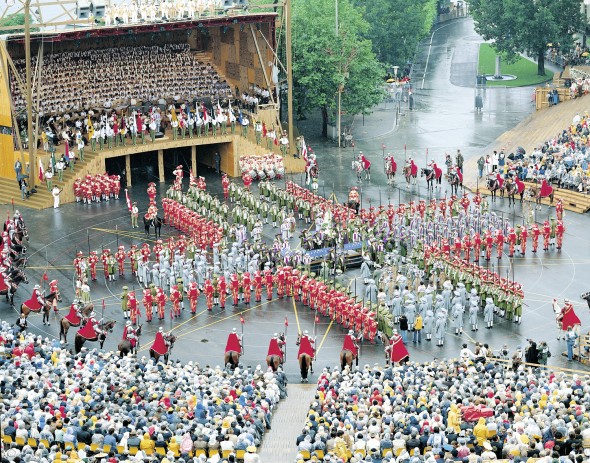 Prize-giving ceremony for winegrowers: the Swiss cross was formed by the Hundred Swiss Guards 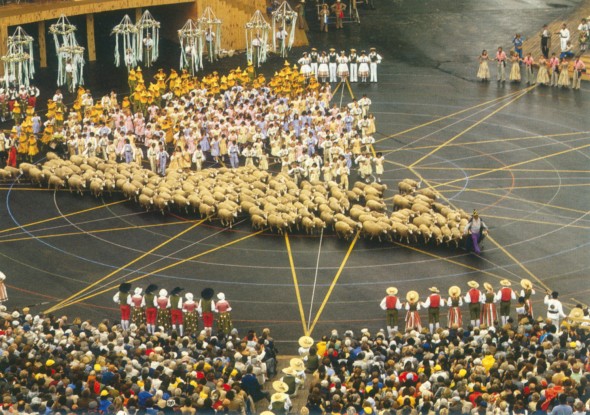 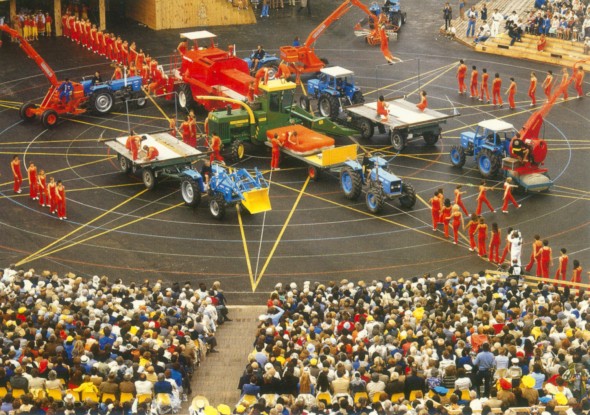 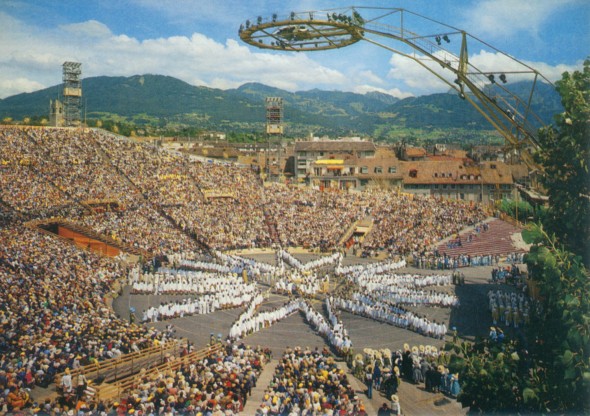 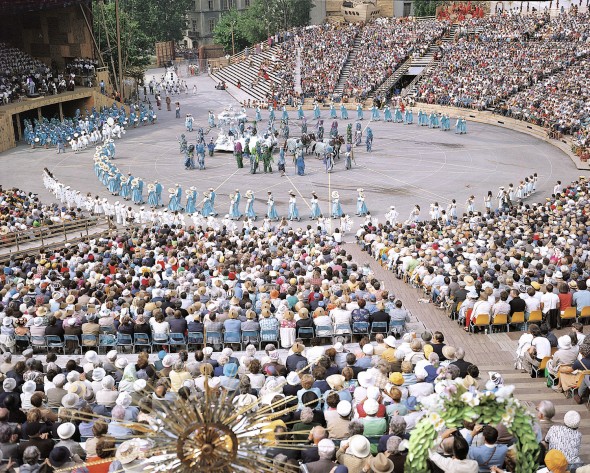 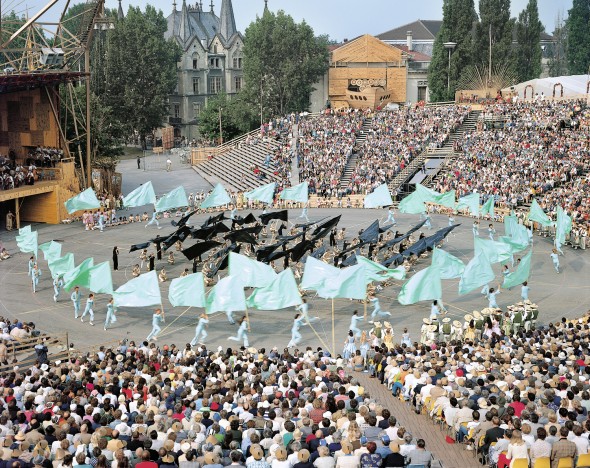 Chemical struggle against parasites that attack the vines, Winegrowers Festival 1977 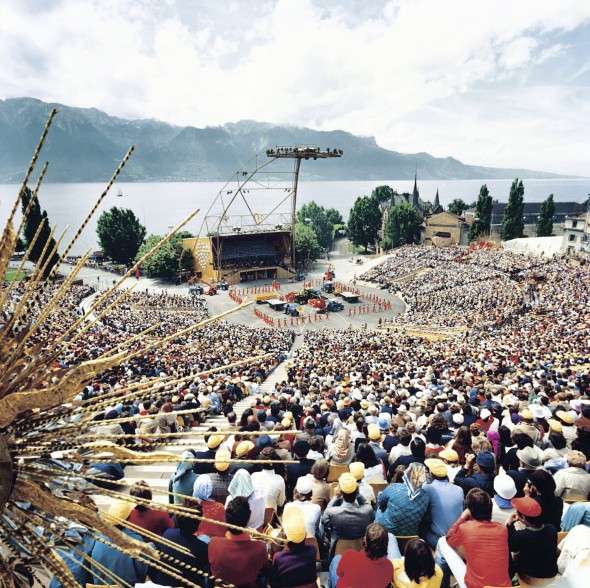 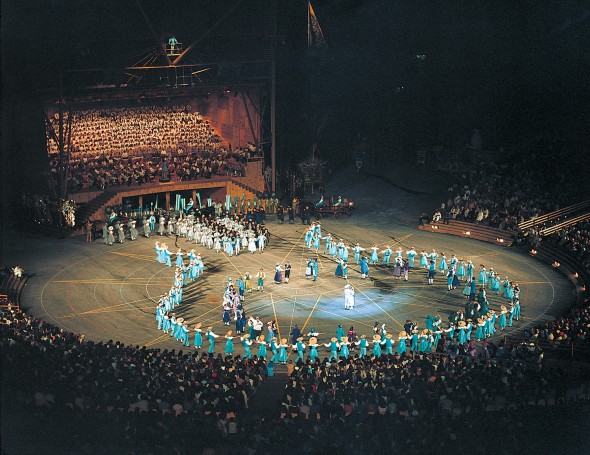